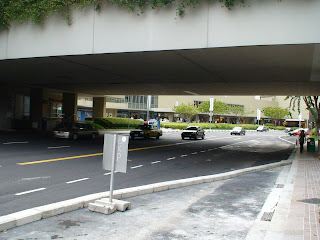 The doctor came out of the operation room.Everyone got up with their hearts beating fast.
After a small pause, which seemed like a 100 years, the doctor looked up and said "Tobu is out of danger now.Though I must say it is a pretty bizzare way to have an accident.He has a fractured hip bone, his left wrist is cracked and he has a gash on his back, it will take some time for all this to heal.You have to be patient" the doctor said without batting an eyelid.

It's 9.00 am in the morning and young Tobu is preparing for his first job interview.Going through some technical documents and some research material he'd prepared.In an illustrious family of scholars,young Tobu was going out to make an impression today.As far back as his great grandfather's days everyone had made it big on their own.This was his moment.His day. And he was not going let anything get in the way.

Just as he was about to go out his grand mother walked in.She usually kept to her self but would always be watchful of young Tobu. Grammy,as Tobu would affectionately call her,the only loving soul in the family who would patiently wait while he left and got back.She was the only one in the busy family who would hear young Tobu out all the time,his rants and raves, his frustrations,his fears and his achievements and more importantly protect him from all harm and danger , beatings and scoldings.Tobu got more attached to his grandmother ever since his mother divorced when he was a little boy.His grand mother had brought up him and took good care of him.

Grammy said " Tobu can you not go out today? I am not feeling too well."
Tobu was taken aback.."Grammy this is my big day !.you know that.don't you ?You know how much it means to me?"
Grammy quietly said"I know dear,but you might have other stories to share in life. ! Maybe this is not your story"
Tobu was getting a bit confused now .What was with Grammy today ,he thought. Maybe she's a bit nervous about my job interview.

"Don't worry Grammy you'll be fine." "I will rush back the moment my interview is over,he quipped as a matter -of-fact.
"I am asking you to not take the interview today,can you reschedule for tomorrow?"
The clock was ticking fast and he had to rush now. "Grammy,Tobu said in a slightly irritated tone, "I have to go..NOW.
He looked into Grammy's eyes one last time,for a moment he thought ,maybe I 'll surprise her today and get her favorite flowers on my way back.

As he closed the door behind him he felt a little bad,at shouting at Grammy."it's only natural that old people get senile,and we have to deal with them sensitively",his thought faded as he dashed to the bus stop.

The Bus was crowded and packed like never before,it was peak hour at it's best.He was hanging in a conclave position on the foot-board at the entrance door.the push from inside was immense, and when the bus hit a pot hole , it jerked vigorously .Tobu was flung out of the door and hit the pavement/kerb as the bus was leaving the area.Some noble souls brought him to the hospital,bleeding and unconscious.His wallet gave his identity.

Tobu opened his eyes ever so slightly,still in a semi-conscious state of mind.The ICU nurse called the resident doctor to check on Tobu. He was trying to mumble something.It was incoherent and slow but he was trying to say something.Tobu's family who were waiting outside,quickly came in seeing the doctor trying to hear what Tobu was murmuring.

The Doctor could barely hear Tobu's broken words, but he seemed to be saying "Thank You Grammy for having his said.."quipped the perplexed doctor.Tobu's father clarified that Tobu was probably remembering his Grand mother,who had just passed away a few months back.He was very close to her.


The main surgeon on his regular rounds was examining the patients.Tobu was recovering well,and he was looking at the emergency room record.
It read " This man was pushed out of the bus and he hit his head on the kerb" and became unconscious immediately while bleeding profusely."It was an eye-witness account of the person who brought him in.


"Wait a minute ! " the doctor thought. this is odd.Where is the head injury? He has a broken hip,wrist and a gash but nothing to the head.And then he saw the resident doctors comments...the patient tried to say "thank you Grammy having his said..." ! he summoned the resident doctor who was about to leave after his night duty and the doctor and asked him "John what does this mean...?"he nodded with a shrug and said "no idea" !

Tobu turned his head and completed the sentence..."thank you Grammy for saving my head " !

Say it only if you mean it -

The scorching sun follows me Hot dunes burn my feet I know you are waiting for me As I leave the last oasis. A grain of sand tears my skin T...

Writing is simple,but not easy.

Gyanban Fiction & Poetry by aayanman,aayanisms,gyanban is licensed under a Creative Commons Attribution-NonCommercial-NoDerivs 3.0 Unported License.
Permissions beyond the scope of this license may be available at gyanbann@gmail.com.

Every lie has a moment of truth in it - its called belief.

Not all those who are lost want to be found.

Sometimes a meaningful moment can span a lifetime,and sometimes a lifetime of moments become meaningless.

Life is like a commercial on TV,everyone is looking,but no one is watching.

The future validates what you learnt from History.

If you will, you will.

If inspiration guaranteed sustainability~there would be worldwide chaos.

Organize the folders of your life.

Silence has a moment in victory and defeat alike.

Some secrets are born to die with you.

Some questions are best left unanswered because theirs answers lead to more questions.

In a series of complimentary accidents,life actually becomes a design.

In the war of practicality - Innocence is biggest prisoner !

If love is a trick,it will have a beginning and an end,but the magic lies in between.

Life is a constant variable.

Ambition and Potential are mutually exclusive.

Life is about moving,even after we die.

Only perception can change people - not reality.

United we create chaos - divided we get order.

Our lives have become entertainment.

If life is a cycle...you will meet your past in the future.

Every great relationship gets tested by time or circumstance.

Trust is inversely proportional to time.

Every action has an equal and opposite perception.

Is there life before death ?

Repetition brings out the best and worst in you.

Escaping from Escapism is..?

Be a part of apart !

Why is Orange not Red?

Numerics could be the real alphabets ?

The true path comes without asking.

Capitalism and fairness are strange bedfellows.

Hope and Positivity are mutually exclusive.

Hope is time consuming,Action is self consuming.

Men are misunderstood for their simplicity..

Women are misunderstood for their complexity !

Those who did it and did not... laid the foundations for have's and have not!